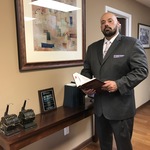 Benjamin Matthew Kurtz has been practicing in Maryland since 2016. During that time, he has successfully represented individuals and entities in a variety of cases, focusing most of his time on personal injury and criminal defense.

Benjamin Kurtz successfully represents individuals who have been seriously injured.  With compassion and confidence, he deftly navigates his clients through the legal maze to an outcome designed to mitigate their pain and suffering and maximize recoveries for clients in need.  The fact that many of Benjamin's clients are referred to him by his former clients and other attorneys is a resounding testament to his ability to affect successful outcomes on their behalf.

Criminal Defense and Other Litigation

In addition to civil litigation and personal injury cases, Benjamin's practice also encompasses a variety of criminal defense and other litigation matters. Since being licensed to practice law in Maryland, Benjamin has represented individuals charged with misdemeanors, including DUI/DWIs, jailable motor vehicle violations, misdemeanor assault, theft, and possession of controlled dangerous substances. Additionally, serious felonies, including Conspiracy to commit first degree murder, solicitation, attempted first degree murder, sex offenses, felony assault, narcotic distribution, possession with intent to distribute, arson, burglary, along with weapon and probation violations in State and Federal Courts in Maryland.  Benjamin's familiarity and capabilities with criminal procedure and his well-known unrelenting cross examination skills have been invaluable to his clients.

Benjamin is often called upon to represent individuals in pursuing or defending domestic protective orders and peace orders as well.

Benjamin attended public schools in Maryland and graduated from the University of Maryland, College Park in December of 2011.  He then attended The University of Baltimore School of Law, where he was President of the Criminal Law Association, and ultimately obtaining his Juris Doctor degree in 2015.  While in law school, pursuant to Maryland Rules 17-106, Benjamin completed 40 hours in mediation training as well as participating in the Civil Advocacy Clinic as a Rule 16 attorney.

Benjamin has been recognized by Super Lawyers as a Rising Star in both 2020 and 2021. Additionally, he has received recognition by multiple honors organizations such as Alpha Phi Sigma, Golden Key International Honor Society, American Institute of Criminal Law Attorneys 10 Best, Marquis Who's Who, and many others.